One final series to decide who will hoist the LCS trophy, will it be 100 Thieves or Team Liquid?

The LCS Championship has reached its apex after weeks of competition. Eight entered but only two remain, Team Liquid (“TL”) and 100 Thieves (“100T”). The last time these teams met, Team Liquid defeated 100 Thieves handily in the Upper Bracket. Before that, TL had a fairly easy run of it too, and are certainly looking like the favorites here. However, 100T has truly leveled up through the split and post-season, even bringing down Cloud9 in dominant fashion yesterday. With one last challenge for the teams and star players left, everything was on the line in this final best-of-five of the domestic season!

Although TL was expected to be the heavy favorites, Game One showed 100T didn’t give a damn about that. Their early game was immaculate, with Closer having 100% neutral objective control. He started it off with a Cloud Dragon, then a Rift Herald by eight minutes. However, it was Santorin who set up the first kill as he rotated top to kill Ssumday for First Blood. Very soon after, 100T used Rift Herald bot lane to dive the tower. Despite multiple TL members showing up to help defend, it only served to feed the 100T war machine as the squad grinded four kills for themselves and the First Tower bonus.

From here, 100T had a massive gold lead and never let go. Closer continued to secure dragons without contest and keep 100T on the offensive. At 18 minutes, they forced a team fight in the top lane, where they cut down three from TL while only losing one of their own. A few moments later, Abbedagge’s LeBlanc practically one-shot CoreJJ’s tank Leona, showing just how doomed things were for the boys in blue.

Eventually, the Ocean Soul dragon spawned, which TL had to contest. Unfortunately for them, 100T was more than ready for that fight and obliterated them, getting two kills and the Soul, as well as the Baron not too long after. With the two major buffs, TL had no chance of stopping 100T as they pushed through the bottom lane and smashed their Nexus. It certainly was a statement win for 100T, but could they keep up the momentum from here?

The answer to the previous question: a resounding yes. 100T kicked off Game Two with a great gank from Closer towards the top lane, where he killed TL’s star player Alphari for First Blood. This time, TL did manage to take a Rift Herald away from Closer, but 100T responded by going bottom lane to snag two kills. Fortunately, TL was able to give a gold lead to Alphari by using the Rift Herald top lane to claim the First Tower bonus.

Honestly, at this point, it looked relatively close. But at 15 minutes that all changed. After 100T secured a Herald for themselves, they picked off Santorin and killed him, which ended up leading to a tower take top. But TL mispositioned and 100T fully capitalized, grabbing multiple quick kills and bursting the gold lead in the favor. However, 100T wasn’t quite as clean with the lead in the game, as they did push too far forward in a jungle skirmish and let TL win a three-for-two kill trade, which almost led to a TL Baron, but 100T managed to push them off of it.

Luckily for them, they were still pretty far ahead and TL wasn’t able to catch up to them. At the 28 minute mark, a close team fight happened in the mid lane but Closer on his Viego pick stole some souls and cut through the TL line to turn the tide of the fight. With this opening, 100T easily destroyed the mid lane Inhibitor. It wasn’t long until the next fight broke out, again in the TL jungle, but this time 100T cleanly killed three from TL with no losses. No need for Baron they thought, as they simply pushed through mid and ended the game to go up 2-0 in the LCS Championship Grand Finals. 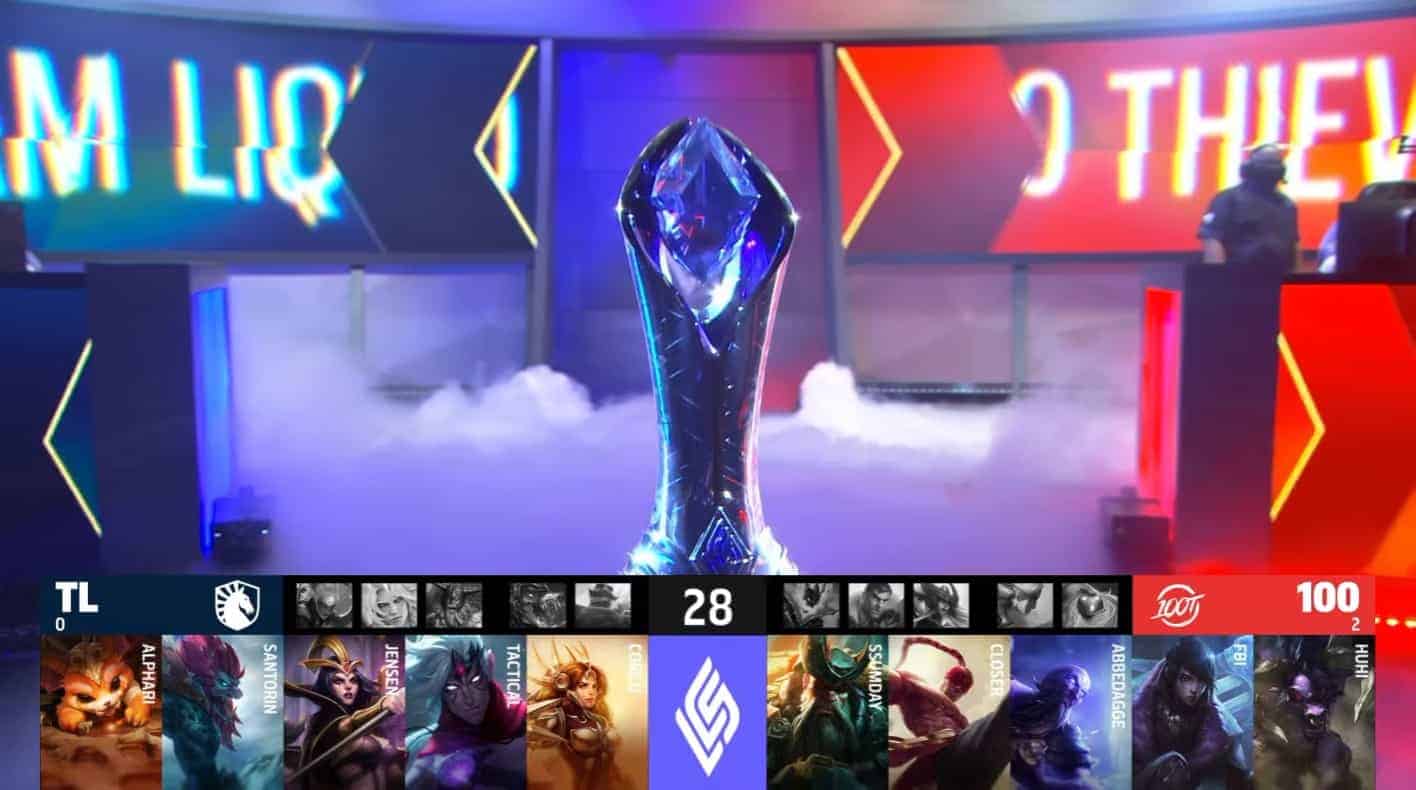 With their backs against the wall, it was all up to TL to show resilience and stay alive in this series. But it was 100T’s Closer who fought in the top side river to kill Santorin for First Blood. At eight minutes, TL showed signs of life in the bottom lane, where they picked up a kill while Closer took a dragon. Like every other time in the series though, 100T struck right back to pick off Santorin at nine minutes. Then they claimed a kill at 10 minutes thanks to some clean FBI footwork.

Things went from bad to worse at 12 minutes, when 100T caught out CoreJJ bot lane, then used a Rift Herald to take two towers in one go. Moving ahead to the second Herald, TL tried to contest 100T when they went for the objective but lost three members and the Herald in the process. It really looked like TL was lost, as Tactical could never stay safe and was even solo killed by the star jungler Closer, who continued to run a clinic in this series.

A few minutes passed with little action, but with a quick pick, 100T killed Tactical and headed to Baron. Desperate, TL had to contest, but in the ensuing team fight lost three members, and not the Baron, but the Mountain Soul. This made it even easier for 100T when, at 26 minutes, they rushed the Baron and claimed it with no contest. Equipped with the Hand of the Baron, 100T turned from the pit and slaughtered TL where they stood. After killing three TL champions, they pushed straight through for the win.

In what was perhaps the most dominant Finals series of all time, 100T 3-0 swept TL and are the new, reigning LCS Champions!