Some of the strongest meta offlaners who we think might feature at The International 10.

Valve has changed the meta well with the 7.30 update. The other smaller yet extremely important updates which followed the vast patch also balanced and tuned the meta. As Dota 2’s offlane biggest tournament closes in, we have seen many professional players leaning towards specific heroes in the patch.

Same is true for the offlane. Let’s have a closer look at three offlane heroes which we could see on the stage at TI 10. Or, these heroes will either get picked or banned a lot depending on the games. Either way, they’re sure to be popular.

Enigma has been in and out of the favorites in the previous meta. However, after 7.30 he’s established a strong foothold in the offlane. Enjoying over 53% win rate on Dotabuff, Enigma is one of the few heroes lacking in most of the traits common of an offlaner, yet he still shines in that position.

In the laning phase, Enigma uses Demonic Conversion to eat his own ranged creep, which denies experience and gold to the enemy. He also farms fast with the eidolons and can harass enemies with damage or by denying creeps in the lane.

Enigma is great in teamfights from the moment he has Black Hole. Besides disabling, he does tons of damage using Midnight Pulse.

With an incredible potential in team fights and ability to clear creep waves and push lanes, Enigma is one of the favorite offlaners in the upcoming tournament.

Night Stalker has become a tremendous threat in the offlane. After buffing him in the 7.30 patch, Valve did nerf him in the 7.30c and 7.30d updates, but minor changes have not made a huge dent in his success.

The hero still stands over 52% win rate on Dotabuff and is one of the preferred choices for professional players.

There are multiple factors which make Night Stalker so good. First, he has an amazing Shard ability which makes Hunter in the Night a castable skill on creeps, granting 35% of Night Stalker’s maximum HP and 25% of maximum mana every 20 seconds.

That’s an enormous deal especially in fights. Night Stalker is tanky and deals a ton of damage. He grants vision to the team in the night time and can disable enemy heroes with silence. Overall, he is a huge asset to any team looking to dominate early to mid game. 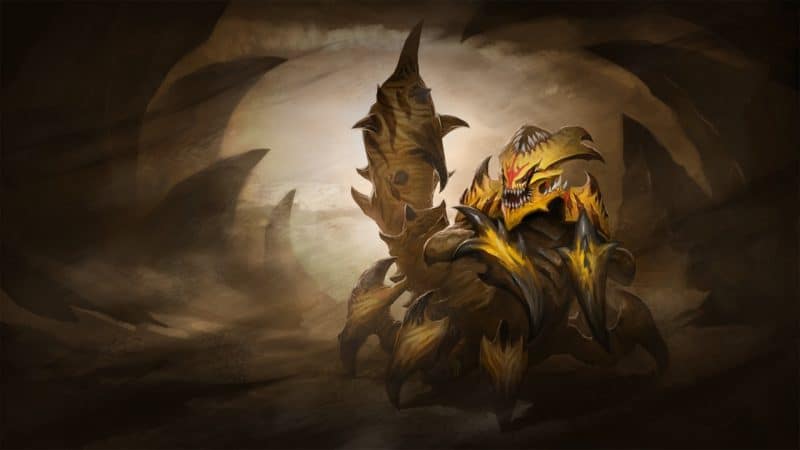 Even after several nerfs to the hero, Sand King remains a ruler in the offlane. Having over a 51% win rate, he is one of the most picked offlaners in the current meta. Sand King has a great ability set which matches the current scenario of games.

He has a reliable stun, he can farm well and clear creep waves with Sand Storm and Caustic Finale, but above all he is a great team fighter.

Sand King is pretty tanky with the right items and it’s not surprising that he can get items quickly. He does not need a fantastic lane to get a quick start and can farm the jungle and get ahead. Items like Aether Lens, Shiva’s Guard and Octarine Core, he is a menace around the map.

Although we’ve covered the top three heroes which could dominate in TI 10, let’s look at some who can also make their way on the list. Legion Commander, Beastmaster, Bloodseeker, Lycan, Venomlancer and Magnus are some of the popular picks in the professional scene at the moment.