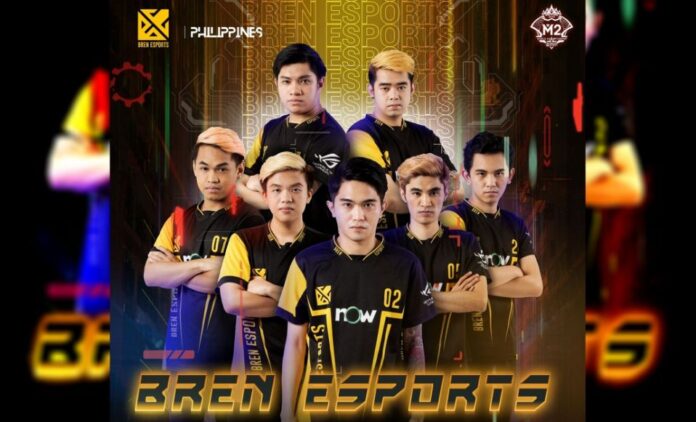 With their victory, Bren Esports take the lion’s share of US$140,000 out of the tournament’s US$300,000 prize pool. In addition, the team will be given the chance to design their own championship skin with their own branding for a hero of their choice.

The two finalists first met in the first round of the upper bracket in day four of M2, where Burmese Ghouls upset Bren Esports in a 2-0 sweep to send the Filipino squad to the lower bracket.

After getting knocked down to the lower bracket, Bren Esports had to take arguably the hardest road to the championship. On their way to a rematch with the Burmese Ghouls in the finals, the Filipino squad first had to go through MPL MY/SG champions Todak, ONE Esports MPLI champions Alter Ego, and M1 finalists RRQ Hoshi.

Bren Esports’ star player, Karl Gabriel “KarlTzy” Nepomuceno, won Finals MVP honours as well as a US$3,000 prize for his excellent play throughout the tournament that carried his team through some of their toughest challenges.

Burmese Ghouls started the finals in control of game one, holding Bren Esports to five kills while getting 12 of their own after 9 minutes. The Filipino squad was undeterred, however, as they won a big fight around the 11-minute mark to take control of the first Lord and trim their opponent’s kill lead to 13-9.

With momentum on their side, Bren Esports won back-to-back clashes at the 13 and 15-minute marks to claim the kill lead 15-14. After securing control of Luminous Lord, the Filipino squad demolished Burmese Ghouls’ base to take their first win of the finals after 19 minutes of action.

Bren Esports didn’t let up in game two, as they took six clean kills after just four minutes. While Burmese Ghouls repeatedly tried to strike back, it only served to grow their opponents’ kill lead to 13-1 after 6 minutes, then 16-1 after 8 minutes. Despite their best efforts to defend, Burmese Ghouls couldn’t stop Bren Esports from taking a commanding 2-0 series lead after a 12-minute beatdown.

KarlTzy led the way for Bren Esports in game two, putting up a 9/1/8 KDA on Yi Sun-Shin as his team utterly dominated the kill board 26-4.

Game three was a much slower affair compared to the previous two, which allowed the Burmese Ghouls’ more objective-oriented playstyle to thrive. Despite the kill score being tied at 4-4 by the 9-minute mark, the Burmese Ghouls were ahead in gold and in control of the map. That allowed them to slowly choke out Bren Esports after 13 minutes and finally get their first win of the series.

Bren Esports came out swinging in game four, with KarlTzy on Lancelot getting a Triple Kill just two minutes in to give his team an early 4-2 kill lead. The Filipino squad continued to dominate the clashes and had a 14-2 kill advantage by the 8-minute mark.

However, the Burmese Ghouls turned the tides by chipping away at their opponents’ lead in repeated skirmishes starting from the 10-minute mark. Despite being up 22-13 in kills by the 15-minute mark, Bren Esports was unable to stop a streaking Burmese Ghouls squad from cracking open their base and grinding out a 19-minute win to tie up the series 4-4.

Bren Esports had another strong start in game five by taking an 8-2 kill lead just 4 minutes in. The Burmese Ghouls struck back earlier compared than the previous game, however, trimming their opponents’ kill lead to 11-7 by the 8-minute mark and tying things up at 12 kills apiece at 10 minutes.

In a huge clash for control of Lord at the 12-minute mark, Burmese Ghouls knocked the wind out of Bren Esports to take game five after 15 minutes with a 20-12 kill lead and come one win away from the championship.

The pivotal sixth game of the series was as closely-contested as it could get, with both teams on equal footing 8 minutes in with 9 kills apiece. Bren Esports blew the game wide open in a huge clash at the 10-minute mark that gave them control of Lord and a 16-14 kill lead.

Showing the same resilience they did in games three and four, the Burmese Ghouls were able to repel their opponents’ push at the 12-minute mark. However, Bren Esports were able to win a huge fight at 14 minutes that gave them control of Luminous Lord and the chance to force a game seven after a 17-minute thriller of a game.

KarlTzy once again came up huge for Bren Esports, posting a 9/1/11 KDA on Brody to help his team gain a 26-18 kill advantage to force the finals to an all-or-nothing decider in game seven.

Fittingly for a game seven, both teams were in a veritable deadlock in the early game, even as the Burmese Ghouls were leading in kills 8-5 by the 6-minute mark.

What ended up being the championship-winning clash for Bren Esports took place in the 12-minute mark, where KarlTzy decimated the Burmese Ghouls to give his team control of Lord and a 14-12 kill lead.

With the championship within their reach, Bren Esports tore through Burmese Ghouls’ base to achieve ultimate victory after 14 minutes of some of the best MLBB play in the history of the game.

E-Sports Authority is dedicated to providing independent media coverage to all E-Sports News related from around the world. Its part of the Flexgigzz company which is the Asia leading marketplace for freelancer service and together with SOHO Learning Hub which is an online platform for short courses.