Burjui disqualified from EU DPC due to forged COVID-19 test 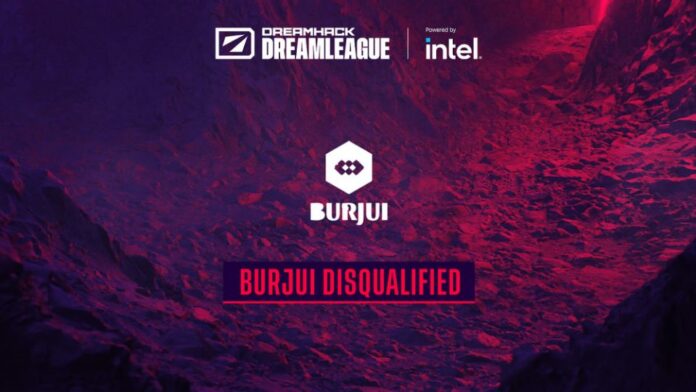 European team Burjui have been disqualified from the lower division of the Dota Pro Circuit’s (DPC) European regional league on Thursday (18 February) due to a breach of tournament rules relating to a forged positive COVID-19 test.

According to a statement from Dreamhack, the organisers of the DPC’s European regional league, Burjui requested to officially replace one of their players, Russian midlaner “flacs”, after using a substitute for the maximum allowance of four matches per season.

The team cited medical reasons for their need to replace their midlaner and provided a positive COVID-19 test result. Given the circumstances in current times, teams competing in the DPC could be allowed an emergency transfer upon reviewing their respective cases and the provided documents.

Dreamhack said that the information Burjui provided to request the emergency transfer conflicted with information they previously provided, which then prompted an investigation. During the course of the investigation, Burjui were asked for additional information and evidence in order to support their request and clarify the situation, to which the team declined.

The positive COVID-19 test that Burjui previously provided was then checked for authenticity and was subsequently found to be a forged document.

As a result of Burjui’s attempt to circumvent DPC rules, the team has been disqualified from the ongoing season in the lower division of the European regional league. All of the team’s matches, both before and after their disqualification, have been voided and default wins awarded to their opponents.

“Actions such as these are detrimental to the competitive integrity of ESL, DreamLeague and the DPC. We will always rigorously enforce the tournament rules to ensure our competitions remain fair to all involved,” said Dreamhack.

Burjui’s disqualification comes just a day after Meta4Pro withdrew from the lower division of the DPC’s European regional league. The team was forced to remove itself from the league after suspicions arose that some of the players in its roster were involved in match-fixing.

Despite Burjui’s disqualification and Meta4Pro’s withdrawal, the format for the lower division of the European regional league remains unchanged. Both teams will be treated as the two bottom teams of the division and are therefore eliminated for this season.

As a result of this, the remaining teams in the lower division, namely Creepwave, Brame, Hellbear Smashers, Spider Pigzs, No Bounty Hunter, and Hippomaniacs, will automatically advance into the next season. Creepwave and Brame will also be promoted to the upper division for the next season as they hold the top two spots in the division.

Similar incidents across the DPC

The incident with Burjui will not be the first time that a team has been disqualified from this year’s DPC.

The 2021 DPC qualifiers in early January were marred by multiple disqualifications. Malaysian stack VisDota2 was barred from participating in the second stage of the closed qualifier and the subsequent open qualifiers for the Southeast Asian regional league for using a player that had been previously banned by Valve.

The player in question, who plays under the tag Deska, was a member of the Chinese team Avengerls that was caught in a match-fixing scandal with top Chinese organisation Newbee in May last year.

North American stack VirtusProPolar (no relation to the CIS organisation Virtus.pro) was also disqualified for an unauthorised use of a stand-in. VirtusProPolar won the region’s first open qualifier to earn a spot in the closed qualifier, but their spot was rescinded, instead given to the third-placed team of the second open qualifier following their disqualification.

Jimmy “DeMon” Ho, who was playing with A-Team during the qualifiers for the North American regional league, was also handed a disqualification for misconduct in previous tournaments in the midst of the qualifiers. DeMon was among a number of personalities in the Dota 2 scene accused in a wave of allegations of sexual misconduct in the esports scene, alongside the likes of casters Grant “GranDGranT” Harris and Toby “TobiWan” Dawson, in July last year.

As a result of DeMon’s disqualification, A-Team was forced to find a replacement and is currently competing in the region’s upper division.

In mid-January, Team Assault was disqualified from the lower division of the Southeast Asian regional league after being found guilty of account sharing. In the context of this incident, account sharing refers to a player sharing his Dota 2 account with another player so that the latter can play in professional matches while posing as the former.

Valve has not given any statements regarding the above incidents at the time of writing.

The first season of the DPC is already in its second half of competition. The regional leagues in Europe, Southeast Asia, the CIS, North America, and South America are set to end this month. Meanwhile, the Chinese regional league will run later into mid-March as a result of a mid-season hiatus to accommodate Lunar New Year celebrations in the country.

The top teams from the upper divisions of the six regional leagues will also be competing in the upcoming ONE Esports Singapore Major, which is scheduled to run from 27 March to 4 April as an in-person LAN event.