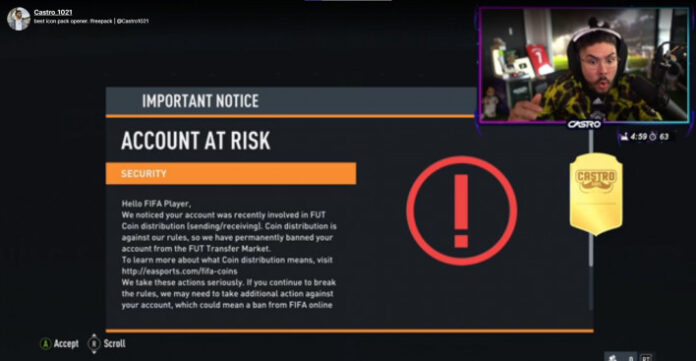 Well-known FIFA Twitch Streamer Castro_1021 was permanently banned from FIFA 22 for allegedly engaging in FUT coin distribution, a practice where players sell the in-game coins to other players. The practice is explicitly banned by EA, who claims it causes “inflation” to the game economy since players are using money that they didn’t earn through gameplay.

The ban occurred live on his stream and elicited a very animated response from the streamer, who was absolutely furious at the ban and denied the allegation leveled at him by EA in no uncertain terms.

“WHAT? Permanently banned?” the streamer yelled into his microphone. “The day before the group promo stage? And I just dropped like 300k f*cking FIFA points on Black Friday! And you think I am coin distributing?”

As a result of the ban, Castro will no longer be able to trade on the FIFA marketplace. He took to Twitter, Tweeting out #FreeCastro and tagging the account for EA Sports FIFA. He has since deleted that Tweet for unexplained reasons. 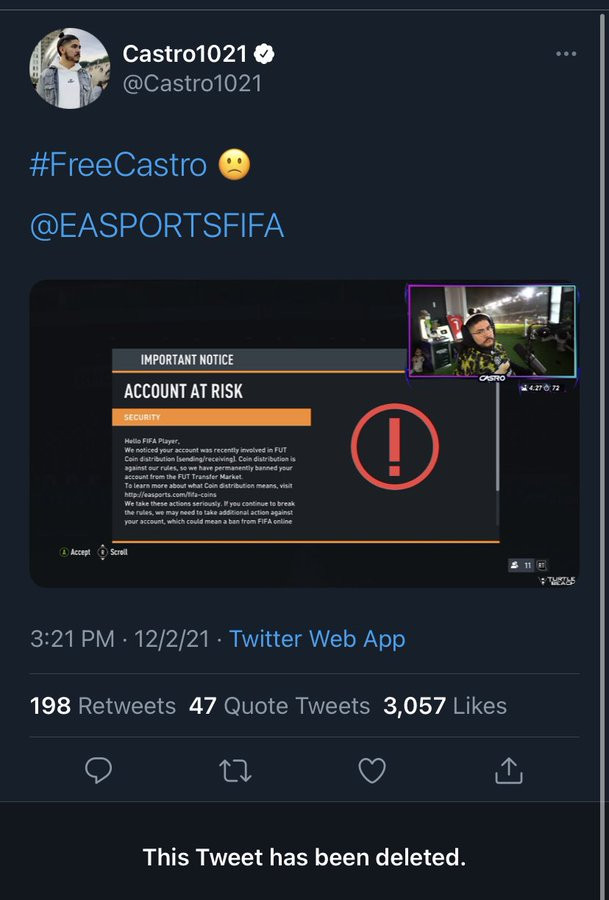 Castro claims that he didn’t do anything wrong, saying “I didn’t do anything, bro. Free me, man! Free me.” It is possible that EA will reinstate his account should they determine that the disciplinary action was a mistake, though that is far from a guaranteed outcome.

Castro boasts 3.3 million followers on Twitch, and is well known for his FIFA content and for opening packs of FIFA trading cards on stream.

Gianfranco Zola is one of the best cards in FIFA 22, and the Italian forward has received a brand new Prime Icon SBC. Italian football...
Read more
FIFA

FIFA 22 all-rounder Houssem Aouar has his first special card this year, here’s the cheapest way to get your hands on his Winter Wildcard. Houssem...
Read more
FIFA

Dubai-based esports organisation Galaxy Racer has announced a partnership with eLaLiga Santander, the esports branch of Spanish football league LaLiga. The partnership will see the introduction of ‘Beat the...
Read more
- Advertisment -

CouRage Explains What “Killed” His Love for CoD Multiplayer

Popular Call of Duty content creator CouRage revealed the main reason his love for CoD Multiplayer was “killed.” CouRage has given fans the reason why...
Read more

No Bounty Hunter will have to go through open qualifiers for a spot in the Spring Tour Division II of the Dota Pro Circuit. DreamLeague,...
Read more

Is Teenage Mutant Ninja Turtles Crossover Coming in Fortnite?. After the massive debut of Chapter 3 and Winterfest delivering us Spider-Man content in December, there...
Read more

Following the most recent offseason, the battle for the best of the top laners are at its most exciting in years. All the great...
Read more

FunPlus Phoenix have added another weapon to their arsenal ahead of the 2022 LPL season. Former Gen.G jungler Kim "Clid" Tae-min has signed with...
Read more

In a recent announcement on December 30th, Ziegler confirmed that he’d no longer be a part of the Valorant dev team. Valorant is undoubtedly one of the...
Read more

LCK Spring Split 2022: Check out the final rosters of all the teams

LCK Spring Split 2022: Finals Rosters of all the participating teams. After the off-season, fans will be able to witness the competitive scene of League...
Read more