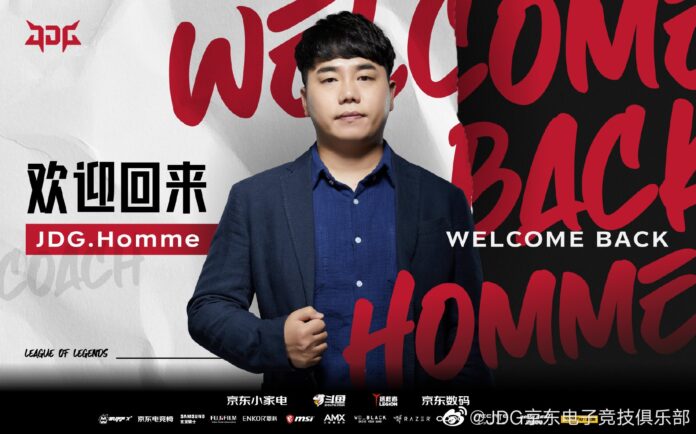 JD Gaming have re-signed Yoon “Homme” Sung-young as their head coach for the 2022 LPL season. Homme has coached for JD Gaming previously from May 2018 to November 2020, and after over a year away from the League of Legends esports scene, has returned to JDG to reprise his role.

JD Gaming have had a busy off-season, and most of the moves have been in the form of departures of players from the LPL roster. Substitute AD carry Jin “Mystic” Seong-jun parted ways with JDG on September 30, and one day later, starting AD carry Lee “LokeN” Dong-wook followed suit.

On December 2nd, at-the-time head coach  Shih “Chashao” Yi-Hao left JD Gaming and joined Bilibili Gaming as the organization’s supervisor. On December 13,  Zhang “Zoom” Xing-Ran and Zuo “LvMao” Ming-hao also left the squad. Zoom made his debut as the starting top laner for Top Esports in the 2021 Demacia Cup, and LvMao did the same after being signed as the starting support for LNG Esports.

It hasn’t been all losses for JDG this off-season, though. With Zoom taking the starting top laner job on TES from Bai “369” Jia-Hao, 369 found himself signed in Zoom’s place by JD Gaming. Lou “Missing” Yun-Feng, who has been playing for Team WE since May 2018, has taken LvMao’s place as JD Gaming’s starting support.

369 impressed both domestic and internation audiences since his debut and we look forward to seeing his playstyle in JDG.
Let’s spam “9” together!#JDGwin pic.twitter.com/HwYUgts2rW

In addition, jungler Dai “Xiao17” Ying-Jie, who spent the majority of 2021 playing for JDG’s academy team Joy Dream, was promoted to the main roster alongside Seo “Kanavi” Jin-hyeok. JD Gaming has not named a starting AD carry; substitute AD carry Huang “Lpc” Hao filled in for the 2021 Demacia Cup.

JD Gaming did not follow up their Worlds 2020 appearance with a strong 2021. JDG finished 4th in the 2021 LPL Spring Split, but failed to match that with a top 4 finish in the post-season. JDG struggled in summer, finishing in 12th place and missing the LPL Summer Playoffs entirely.